Weapons are a type of module used to damage enemies. Most of them achieve this by firing some sort of projectile, though rams are also counted as weapons. 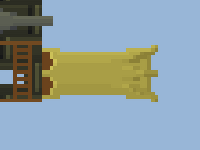 "A bronze ramming bow built to tear holes into enemy ships while leaving your own unharmed."

Rams don't have any special damage-dealing properties. They simply have very high HP and can hence be used to more safely ram opponents.

"A sharp but relatively fragile ram" 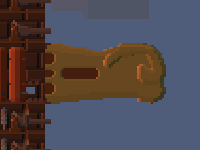 "A huge bronze ram's head to smash your enemies." 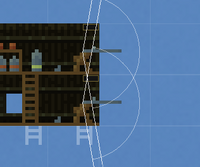 "Muskets are simple firearms that can be quite effective en masse."

These starting weapons have far less range and have a slower rate of fire than rifles. However, they do have an easier time piercing armor. 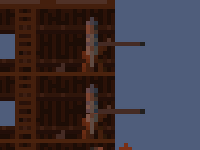 "Riflemen are accurate and cheap, but their weapons cannot penetrate heavy armour."

Rifles are cheap and flexible, but do a limited amount of damage. Still, persistent rifle fire has brought down even massive air-battleships. Though it is not recommended that this be a larger airship's main armament, they can be a useful addition to kill enemy sailors through armor gaps made by other weapons, or as a point-defense to kill troops attempting to invade you ship and destroy aircraft. (They are particularly good at breaching Suspendium tanks. It's a good idea to have about 2-3 on each side of a defensive building.)

"Grenades can do a massive amount of damage at close range, especially to wooden hulls."

Grenades pack quite a punch for their price, but they can only be thrown at very close ranges. However, they can be dropped quite well vertically. The sample ship HMS Mutilatrix, essentially a grenade delivery platform, can be devastating at early tech levels as the combined damage makes quick work of wood airships & stone structures alike.

Grenades do have a vertical ceiling, one of two weapons that can't be fired against targets higher up. They are therefore a poor choice for defensive structures.

The grapeshot cannon is the earliest large weapon able to specifically target aircraft & similarly small targets. However, its restricted range and slow fire rate make it impractical against most small-craft attacks. In practice, you're better off using rifles until flak becomes available. 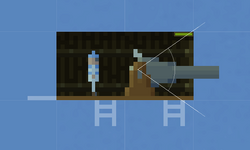 "A single shot can tear through most armour. The mainstay of airship armament."

Due to their piercing damage, cannons are very useful for punching holes in everything. As they are single-shot weapons, their effective rate of fire is highly dependent on the distance to ammo storage. Their comparatively restricted fire arc makes them better suited to support rather than front-of-battle use. (Ships directly above or below can't be hit. Compare Rockets & Rifles, which can swivel to attack vertically.) 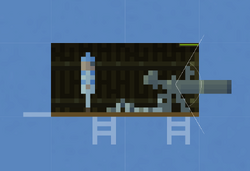 "With its rapid fire rate, a gatling gun can tear apart lightly armoured targets. It's not very accurate , however"

The Gatling gun will chew through anything made of wood or brick, for most uses a single Gatling gun can easily replace a broadside of rifles. However, its significantly more restricted fire arc can be a liability: Gatling emplacements in ships & buildings cannot shoot vertically, while rifles can. As such, it's a good idea to retain some rifles to minimize gaps in fire arcs. A few Gatling guns can penetrate even medium steel armour, which cannot withstand the sheer volume of hits.

250pxShooting an arc of fire, this is a powerful close-range weapon against lightly armoured targets

This is a very powerful weapon that can destroy small units and even highly armored targets: not so much by big damage but by constant fire (it's a stream, not fireballs). Flamethrowers can effectively hold off gargoyles, but it's good practice to escort the flame ship with other ships. 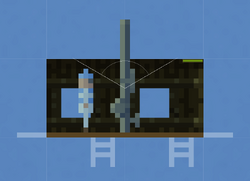 "An upward-facing light cannon designed to shoot down enemy airships"

Weaker than a cannon, nevertheless able to damage moderately armored airships. Its AoE blast effect works well against just about anything that gets in its fire arc; between the 6-shot magazine & quick reload time, flak cannons make life quite short for most targets that get above them.

However, flak cannons can be vulnerable to their victims crashing on top of the cannon (ram damage ensues!), so consider building struts or similar around the cannon to catch crashing ships. Similarly, it's better to have multiple buildings with 1-2 flak cannons, rather than one building with 4 or 5, so one crashing ship can't smash all the flak at once.

Conversely, remember that flak cannons can be installed on airships as well.

"A turreted medium cannon with a wide field of fire. The turret mechanism adds a lot of weight and bulk, though."

The Dorsal Turret has almost double the power of a common cannon but is fragile, both to direct damage and due to blocking any construction above or beside it. Thus, it's impossible to mount more than one per ship or building, to install catch-struts against ships crashing into the turret, or to have a Crow's Nest to help it aim. Further, the Dorsal Turret shares the cannon's weakness of being a single shot weapon, meaning reload time is highly sensitive to ammo distance.

In practice, dorsal turrets are far inferior to flak cannons for general use.

"A ventrally turreted cannon. The gun mount is kind of tricky, but the result is a wide field of fire"

A downwards-facing dorsal turret. Like its counterpart, it's vulnerable, but due to its location a Crow's Nest remains a viable option. As one might expect, these won't work on Landships or buildings. 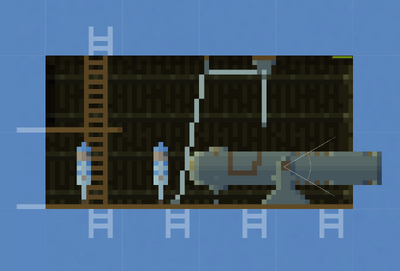 "Slow-firing but devastating. Not even the strongest armour stands a chance"

A bigger cannon, it can blast through anything and also pulverize most things with few shots. It has a more restricted fire arc, but it's slightly more accurate at long range. It has a slow reload time and is a single shot weapon.

“A Heavy cannon on a turreted mount. Powerful and accurate.”

This provides substantial armour-piercing punch with reasonable vertical traversal. Despite being mounted in a Turret, the cannon cannot rotate or flip independently of its parent construction, so getting behind it remains a viable tactic.

A coal driven, steampunk variant of a railgun. It shoots very far very accurately. It also packs a good punch, sometimes piercing the first module hit and continuing to damage further modules behind the target. That said, the extremely limited fire arc limits its effective use to rear-line support fire. Needs coal in addition to ammo.

"Not accurate, or safe, but pretty devastating when they hit."

One 2x2 rocket bay takes the same space as two cannons (2 1x2 modules), but has a far broader arc-of-fire and can hit a little harder, especially against lightly armored craft. They have the nasty habit of exploding violently when damaged and are noticeably inaccurate at range, even with the guidance-fin upgrade technology. Nevertheless, these are generally the most reliable weapon to mount: no matter where it's located, there's a pretty good chance it'll have a shot, and even if it misses, "close" can still count. 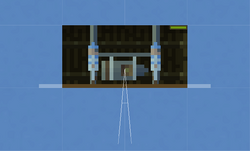 "Bombs dropped from above are an effective way to destroy anything that does not move away in time."

These simple iron bombs are very inaccurate and slow firing, but when they hit, they can do decisive damage, especially against other airships. They are highly explosive and prone to exploding in the bay itself if the module takes damage. This and it's narrow firing arc makes bombs most useful for high altitude ships that can fire on low targets while trying to avoid damage.

A Tank of Charged Suspendium Dust Carrying aloft a bomb fuzed to explode on contact. Often deployed en masse for area denial. In practice, these are fairly slow & imprecise projectiles with extremely limited fire arc. You're better off installing rockets, or, ideally, a flak cannon or two.

Note: This weapon is firing sort of inverted depth charges (floating instead of sinking)

A torsion ballista - simple but effective against lightly armored targets. Like the Grenades, ballistae have a limited vertical range, as well as being the only projectile in-game to suffer ballistic drop. As such, you're better served by swapping them out for another weapon.